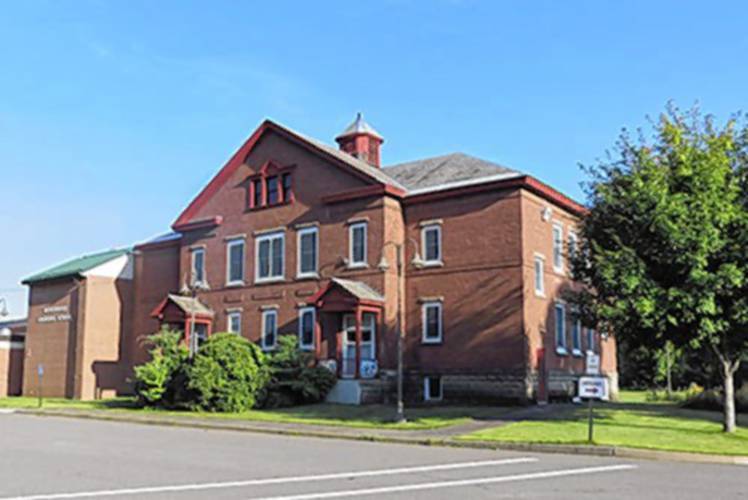 Members of the Hawlemont Regional School District School Committee met with the Northern Berkshire School Union Monday evening to begin a discussion on a request by Hawlemont to become a member of the union.

“I would just say we listen to what the Hawlemont folks have to say to brief the people who are here,” said John Franzoni, superintendent of Northern Berkshire School Union.

Hawlemont Regional School, located in Charlemont, is attended by elementary school students from that town and neighboring Hawley, plus students from other towns who attend through School Choice.

According to Hawlemont School Committee member Hussain Hamdan, a representative of Hawley, the decision to investigate other options for contracting services began with a School Committee vote last spring.

“There has been a preliminary exchange of budget and financial information,” Hamdan said in an interview following Monday’s meeting. “There are a lot of questions that would still need to be answered before going forward in any definitive way.”

He said one of the reasons Hawlemont is exploring alternatives is the rising costs associated with the partnership with the Mohawk Trail Regional School District.

“The other issue has been a concern expressed frequently during School Committee meetings that there are challenges to having one central office be responsive to two different philosophies as to how school should be managed,” Hamdan said. “Hawlemont School Committee has historically been very hands-on, and I think that on the Mohawk Trail end, they tend to defer a little bit more to decisions made by administrators.”

He noted that, with this proposed idea, middle school and high school students would still attend Mohawk Trail Regional School.

“At the seven through 12 (grade) level, Hawley and Charlemont are each individually part of Mohawk Trail Regional,” he said.

“I know there’s a lot more research to be done, a lot of numbers to be put together,” he said. “As far as I’m concerned, I think if the numbers work out and it seems to be beneficial to all of us, I’d be in favor of joining the NBSU (Northern Berkshire School Union).”

Ricko said he forwarded to the Northern Berkshire School Union School Committee questions sent to him by administrators at Hawlemont Regional School.

“This is going to require a few more meetings, at least, and I know there’s a lot of parents in the community that have a lot of questions as well,” he said.

“Given that Hawlemont’s estimated share of the Northern Berkshire School Union costs might be 24%, is it reasonable to assume Northern Berkshire will need to increase its staffing by up to 24% to cover the extra responsibilities so that it doesn’t reduce services to the four current member schools?” asked Suzanne Crawford, a Hawley representative of the Hawlemont School Committee. “And how can we get as accurate an idea as possible about what the costs will ultimately be?”

Over the last three years, there has been an average of 136 students enrolled at Hawlemont Regional School, Hamdan said, referencing a report from earlier this year.

Members also asked how central office staff and services are proportioned amongst the member schools.

Judy Oleson, of the Abbott Memorial School Committee, said while the district doesn’t have those answers just yet, they will be answered as it continues preliminary conversations with Ricko and Hamdan, two members involved in the plan to introduce the idea.

“We don’t have the answers to those questions right now; it’s been too short a time,” Oleson said.

“This process takes a while to determine if this would be the right move for the five districts in the NBSU and for Hawlemont,” he said.

“I would recommend … that we were to do some kind of study before any kind of decision is made,” Franzoni said. “There’s a lot of things to look at, to consider.”

In the absence of a vote on Monday night, Oleson said she would encourage continuing preliminary conversations with Hawlemont. A future special meeting date for a formal vote was not set.

Hamdan emphasized on Tuesday afternoon that no final decision had been made and that the committee is looking at all its options.

“We are planning to host a public information forum to discuss both the Heath situation and our discussions with Northern Berkshire,” he said.

The forum is scheduled for Nov. 8, but a time has not be finalized.

At the time, one of the reasons Heath provided for opting to join Mohawk Trail as opposed to Hawlemont was that Hawlemont was exploring other options, and the cost-sharing agreement between the two districts was uncertain.

Reporter Mary Byrne can be reached at mbyrne@recorder.com or 413-930-4429. Twitter: @MaryEByrne